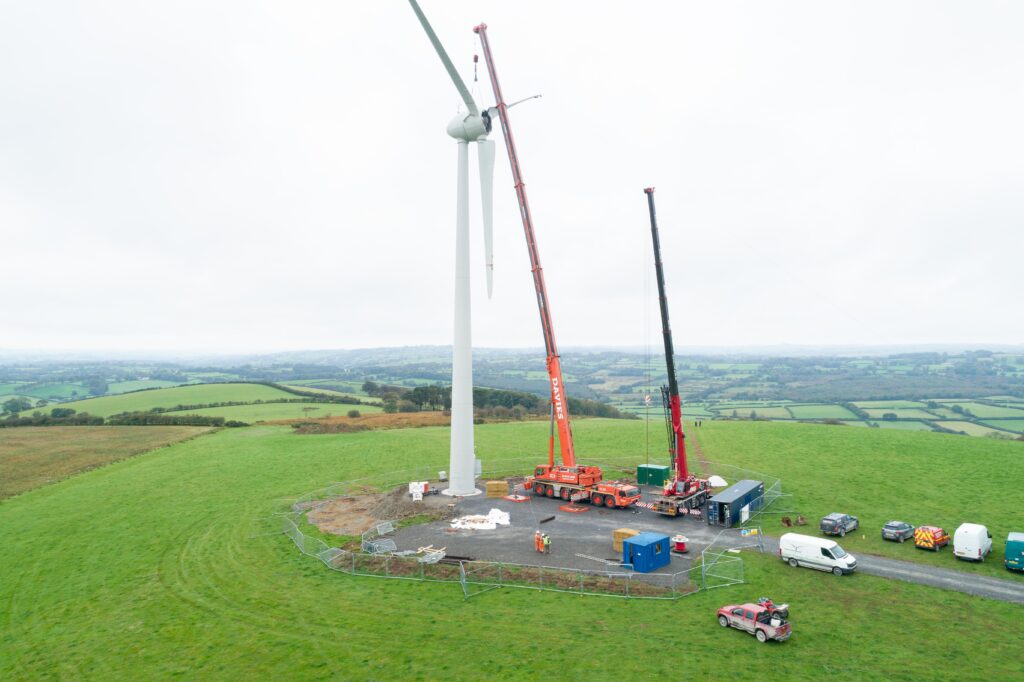 Our community wind turbine has now been commissioned and is generating power.

Thank you to everyone who has supported us on this journey – from our investors, to the great teams who worked on the construction, and the many local people and members who came along to watch the turbine go up.

Erecting the turbine at Ffrwd Farm was a grand engineering feat, taking five days at the start of October during some typically Welsh challenging autumnal weather. It was commissioned on  11th October well before the Feed-in Tariff deadline of 31st December 2019 – meaning this is one of the last community wind projects in the UK to benefit from the government subsidy.

You can see pictures of the complete construction process in our image gallery.

There was also plenty of work to do in the preceding weeks to get the site ready for the installation. Foundations were laid and the concrete base poured. Scottish company Green Cat was responsible for construction.

The turbine’s very large and heavy components travelled here from Holland (where it was previously generating power on a wind farm  which has since been re-energised with larger turbines) on  four separate ferries, arriving at Harwich & Purfleet.  Seven HGV journeys brought them by road to Ffrwd Farm, travelling for the last leg along a farm track which had to be widened, strengthened and extended by 2 km – a big job, carried out brilliantly by local company D.G.Jones and Sons.

Once on site, the components were put together by a team of Dutch engineers from F&B Windpower as the expertise to do this sadly does not exist in the UK. The cranes to manoeuvre the different pieces in position were provided by Welsh firm Davies Crane Hire based in Carmarthen.

On October 5th, the turbine blades were lowered into place in readiness for the big Switch On, an exciting day for everyone, especially those who had been involved from the very beginning. Many people came to view the final stages of the construction including shareholders and the local community.

Since then, there have been a few teething problems which meant we had to take the turbine offline for a short time to sort them out. These were anticipated and are typical of projects like this; everything is now running as it should be.

Thanks are also due to several others: Energy Saving Trust helped source grant and loan funding, while Sharenergy helped us with guidance and the share offer. Second Wind Energy sourced the turbine and oversaw it’s dismantling and storage; they will continue to support us with Operations and Maintenance. Eddie from Bosman Inspecties connected the turbine up following the lift and fixed the teething problems. Green Cat Renewables stepped in as Project Managers, and WindCare were our Balance of Plant contractors.